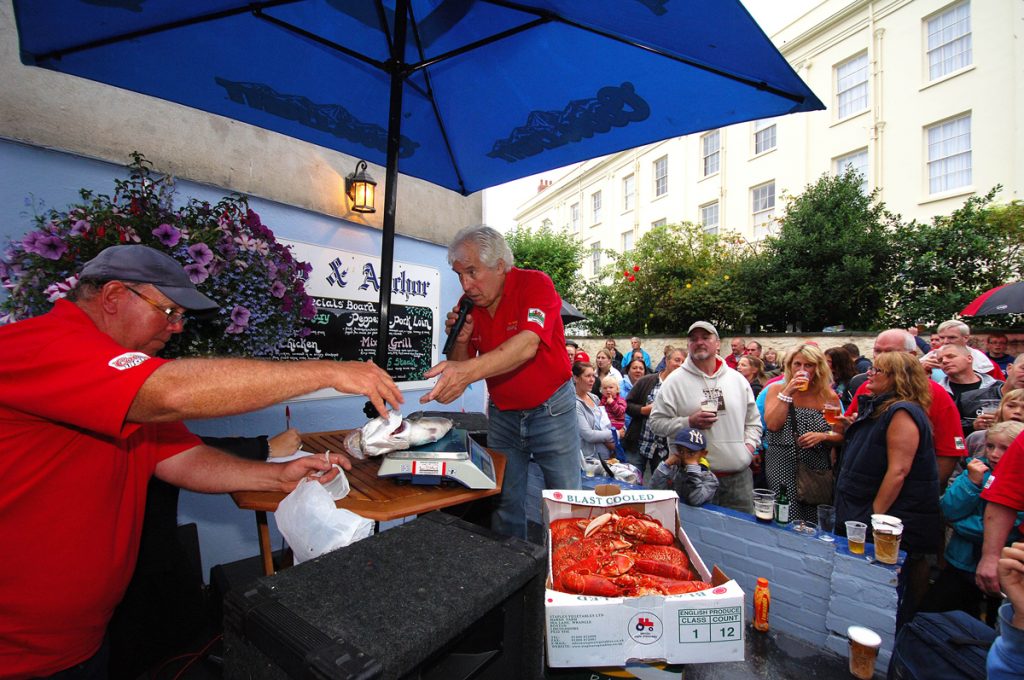 There’s an auction (as usual) and the celebrity auctioneer is local cobbler Dai The Boot. It starts early hours on the tide and the weigh-in and auction takes place outside the Hope and Anchor in St Julian Street Tenby at 7.30pm.

This year it’s on the 23rd July and is a locals only Tenby and Saundersfoot invitation (boat only) competition. However, the more the merrier are welcome at the auction, which has become incredibly popular over the years; enough for even tourists and locals to arrange their holidays around it.

Teams are all pre-registered at the Hope and Anchor paying a fee per rod and are now limited to one bass per rod. All the fish are weighed and a prize is given to the biggest bass to a junior, biggest bass to a female competitor, the biggest fish of another species and, finally, the winner wins their name on the coveted Terry Hermann Memorial Cup.

The organisers produce polo shirts and hoodies in different colours each year which local businesses sponsor by having their name on the reverse and arms and this raises over £5,000 to the cause. You can see these shirts in varying colours and on various ages while walking around in the town in the summer.

The event all started after a few beers in the Hope and Anchor amongst a hand full of friends including Mark where it was decided that the best way to remember Terry was to have a small fishing competition. The first year raised a couple of hundred pounds and last year raised over £12,000.

Terry would be proud as his widow, his son Mark, and his three grandchildren all are involved each year. Last year the event was featured in the television series, Harbour. So if you’re in or around Tenby on the 23rd, make a point of lending your support.