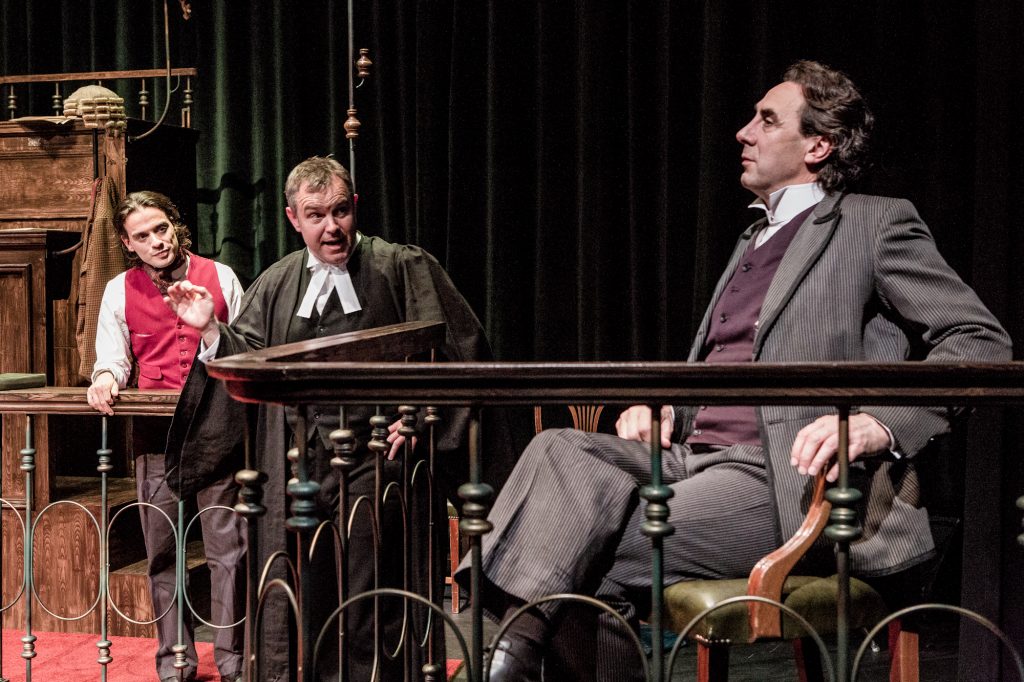 Thursday 14 February 1895 was the triumphant opening night of The Importance of Being Earnest and the zenith of Oscar Wilde’s career. Less than 100 days later he found himself a common prisoner and bankrupt, sentenced by the Crown to two years hard labour for homosexuality. But what happened during the trials and what did Wilde say? Was he harshly treated or the author of his own downfall? Using the actual words spoken in court, Mappa Mundi give audiences a glimpse into what it was like to be in the company of a flawed genius, as this less than ideal husband was tragically reduced from a brashly confident, eloquent and recklessly witty socialite to a man of no importance.

Over the years there has been much speculation and false reporting of what transpired at one of the most sensational trials of the decade. Originally considered as “unfit for publication” by The Old Bailey, and containing “unnatural practices” and “indecent acts” the shorthand transcripts were hidden away. Now, using the actual words from the libel trial, recently discovered more than a hundred years after the event, and with a careful reconstruction of Wilde’s prosecution by the Crown, for homosexuality, it’s a chance for audiences to see the real Oscar Wilde for the first time.

The Trials also marked an important milestone in lesbian, gay, bi and trans history, and we are working in association with Stonewall Cymru to raise awareness of their work to advance the rights of LGBT people in the UK and abroad.

Oscar Wilde remains one of the most iconic figures in literary history. Endlessly quotable, his plays are never out of fashion. The play is co-written by Merlin Holland, a biographer and editor and the only grandchild of Oscar Wilde. For the last 30 years Holland has studied and researched Wilde’s life. He is the co-editor, with Rupert Hart-Davis, of The Complete Letters of Oscar Wilde, and the editor of Irish Peacock and Scarlet Marquess, the first uncensored version of his grandfather’s 1895 trials.

The production is directed by Richard Nichols, a founder member of the company who has appeared in many Mappa Mundi shows over the years. This years cast includes Steve Elliot playing the title role of Oscar Wilde, Keiron Self – star of BBC sitcom My Family and also a founder member of the company, Francois Pandolfo, who has appeared in many previous Mappa Mundi shows including A Midsummer Night’s Dream (2012), The Compleat Female Stage Beauty (2013) and 2015’s Still Life, and Robert Bowman who makes his debut for Mappa Mundi.

Wales based Mappa Mundi started out as a theatre company dedicated to producing the works of Shakespeare and other classic plays, and over the past twenty years have built an excellent reputation for producing accessible, thought provoking and entertaining adaptations of classic theatre which now tours the UK over to much critical acclaim. The Trials of Oscar Wilde is the latest in a series of co-productions between Mappa Mundi and Theatr Mwldan, which have previously included The Compleat Female Stage Beauty, Much Ado About Nothing, A Midsummer Night’s Dream (Guest directed by Peter Doran), Dangerous Liaisons, She Stoops To Conquer (Guest directed by Peter Doran), Canterbury Tales, Moll Flanders, The Importance of Being Earnest and Still Life. The Trials of Oscar Wilde tours Wales this spring between 28th April and 27 May – full details are available on Mappa Mundi’s website www.mappa-mundi.org.uk. Tickets are available directly from the tour venues.